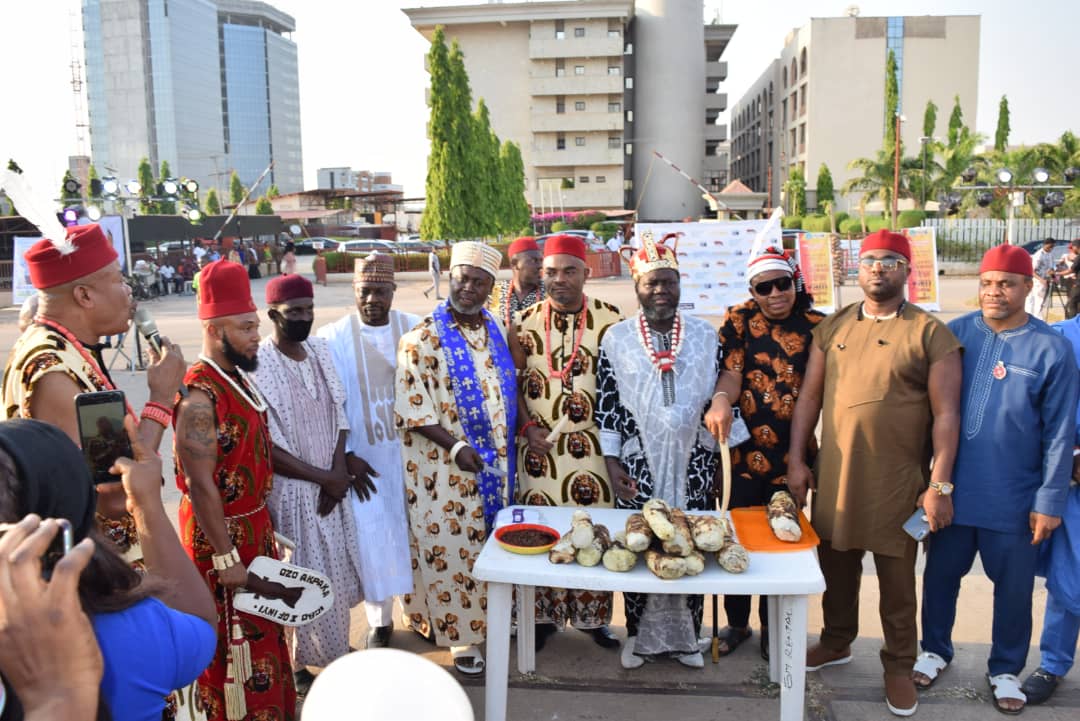 New Yam Festival (Iwa ji, Iri ji, Ike ji or Otute depending on dialect) is one of the major cultural activities of Ndigbo. It is an annual outstanding cultural festival by Ndigbo, often held at the end of the rainy season, projecting “Yam” as “the king of crops”.

The New Yam Festival is observed by Ndigbo, both at home and in diaspora. It symbolizes the conclusion of a harvest and the beginning of the next work cycle. The celebration is a very culturally based occasion, tying individual Igbo communities together as essentially agrarian.

Yam is held as the most important crop of the region in Igbo culture. The New Yam Festival is therefore a celebration depicting the prominence of yam in the socio-cultural life of Ndigbo. On the day of New Yam Festival, only dishes of yam are served at the feast, as the festival is symbolic of the abundance of the produce.

Though the modus operandi and methodology may differ from one community to the next, the essential components that make up the festival remain the same and unaltered. In some Igbo communities the festival lasts a whole day, while in some places it lasts for days and even up to a week. These festivities normally include a variety of entertainments and ceremony, including the performance of rites by the Igwe/Eze (King), or the eldest man, masquerade dances, cultural dances and even fashion parades in some places.

The ritual of offering yams to God or the gods (depending on the communities) is performed either by the by the King/Eze or the oldest man in the community or eminent title holder. Yams are offered to God, deities or ancestors (depending on the community) as a way of showing gratitude to God for his protection and kindness in leading the people from lean periods to the time of bountiful harvest without deaths orchestrated by hunger and for making the harvest of that year possible.

After the prayer of thanksgiving to God, they eat the first yam, soaked in palm oil, because It is believed that their position (Kings/Eze/Eldest man/Ezemmuo) bestows the privilege of being intermediaries between their communities and the gods of the land. This goes a long way to explain the worldview held by Ndigbo as being; “pragmatic, religious and appreciative” in nature.

Friends, who are not from Igbo land are often invited to join in the merriment and colourful celebration of the New yam festival. This festival is a vital event in the calendar of Ndigbo all over the world.

“The harvest of yam and the celebration of the God of the land through the New Yam festival is an epitome of the people’s religious belief in the supreme deity. The coming of the new moon in the month of August marks the preparation for the great “Iri Ji Ohu” festival, but the time and mode of preparation differs from community to community.”[1]