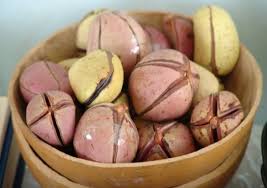 Óji, (also known as Kola nut) is fruit of the kola tree native to the tropical rainforests of Africa. Although the caffeine-containing fruit of the tree is sometimes used as a flavoring ingredient in beverages, it has great spiritual significance in Igbo land.

The Kola Nut is the first thing that is presented to a guest(s) in every Igbo gathering. Óji is used to settle disputes between siblings or neighbors, it is served at marriages and burials, however, the rhetoric rites are not performed at burial.

The Igbo’s have great penchant for kola nut which has four parts. It is a symbol of progress and happiness. The four segments characterize the impending blessings which will be bestowed on anyone who participates in the sharing/eating of kola nut. It also serves as a point of contact for progression in every area of the lives of those who partake in eating the kola nut.

A kola nut which has five segments is a symbol of reproduction. Anyone who partakes in the sharing and eating of this type kola trusts God for fruitfulness, increase and outstanding progress in the lives of her progeny. In the olden days when high importance was attached to large family, this type of kola nut was offered to men who had ample children.

A Kola nut which has six or seven segments means double progress. It is the Igbo’s believe that whoever partakes in eating this kola nut would experience incessant progress in every area of their lives.

Igbo kola nut does not have two segments; any kola nut which has two segments is not served in Igbo land, and is considered bad luck.

WOMEN’S ROLE IN THE BREAKING OF KOLANUT

Women do not traditionally break kola nut though they can cultivate, break and eat them for their own private consumption. In the home, a woman presents to the male member of the family usually the husband to bless the Kola Nut. The husband uses the Kola Nut to welcome the guests into the home. The woman may make other gestures symbolic of welcome such as the presentation of water, food and or present the chalk paste accordingly. In the absence of a male in the household, any available man will be called upon to break the Kola. If the woman is a titled woman or a spiritual Dibia in her own right, she is entitled to be presented with whole Kola Nut when it is passed around to other titled persons before it is broken.

It is imperative to note that this does not represent any discriminatory intentions or a diminished position of women in society. It is a cultural expression reserved to the male gender just as other expressions are reserved for women.

It is the onus of an elderly man from the host family to present kola nut to his guest. It is however, the duty of the local King (Eze) to present and bless kola nut if he is present at a ceremony. This also epitomizes his headship as traditional ruler.

When kola nut is presented to guests, an elderly man from the guest family would touch the kola nut and say to the host “Òji eze nò eze na aka”, this means that the guest have seen the kola which has been presented to them and that the host should proceed to break and bless the kola. The elderly man could proceed to break the kola nut himself or designate the task to a younger man from his family. Where someone other than the elder himself broke the kola nut, it is later passed on to the elderly man for prayers and or blessings.

It is the Igbo’s believe that Oji does not speak or understand English, hence the dictum “Oji anaghi anu bekee”. The elder or Eze then blesses the kola in Igbo lingua franca. He offers a piece of the kola nut to ancestral spirits and deities and takes a piece himself; this can be eaten on its own or served with Okwa Ose (peppered butter paste) or alligator pepper before the rest of the Kola nut is passed round to others present. This act means that the host presents the kola nut with a clean heart and a good conscience.

The myth and custom of kola nut is one of the sacred tradition transcended from our great ancestors and which will not be obliterated. It presence not only permeate and brings unity in the lives of those who partake in it, it also embrace an aura of symbolism which depicts happiness, life, peace and a great ambience for vengeance when offered to the ancestral spirits or gods for vindication and retribution.