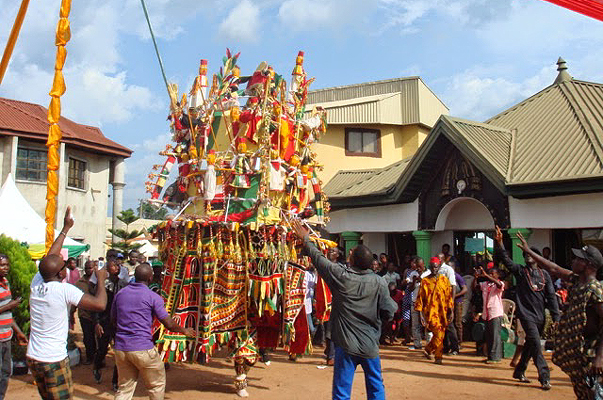 One of the outstanding cultural activities of Ndigbo is the Mmanwu festival. Mmanwu is a traditional masquerade of Ndigbo performed only by the male initiates and involves the use of elaborate cum colorful costumes that are believed to “invoke ancestral spirits”. Masquerades are believed to represent images of deities or sometimes even dead relatives. This underscores the origin of the name – mmuo onwu (spirit of the dead). Suffice it to say that the purpose behind Mmanwu is to create physical representations of spirits and ancestors through the adornment of the masks. The identity of the masquerade is a well-kept secret and performed exclusively by men.

Masquerades (Mmanwu) are held in accordance with the native calendars of different communities. Masquerade traditions have a varied scope of purposes ranging from; executing components of epic drama derived from community cosmology and lore, ushering in new months and seasons, honoring totems and ancestral spirits, validation of myths, execution of burial rites and other social events.

Traditionally, in the past, Mmanwu bore judicial, social regulatory and even policing powers. Masquerades were regarded as the means for maintaining peace and order and were primarily used as law enforcement agents.

In the recent days, owing to the aftermath of colonization in the 20th century, masquerades became more of an institution for cultural entertainment and for tourist attractions.

The visible masquerades are meant for the public. They are often more entertaining. Masks used offer a visually appeal for their shapes and forms, determined by local tradition and beliefs. They come out in colourful robes accompanied by traditional dancers and music. The most entertaining among the visible masquerades are those that represent the spirit of deceased maidens and their mothers (Adamma or Adammanwu) symbolizing beauty and peacefulness. The Adamma or Adammanwu may be accompanied by the elephant-spirit masquerade, representing ugliness and aggression, which frightens the male spectators away from her beauty.

The invisible Masquerades still retain the traditional aura of Mmanwu institution embodied in the enigma of being “the spirits of the dead/deities/ancestors”. They only perform at nights, using sound as the main tool for them. They make sounds that enigmatically echoes and is heard throughout the village. The masks used are usually fierce looking and their interpretation is only fully understood by the initiates. The invisible masquerades can be broken down into three categories; Achikwu ocha/ojii, Agu mmuno, and Ogbagu.

Mmanwu is a highly respected cultural institution in Igbo land and any violation against its institution is met with stringent penalties, which include atonements and reparations.