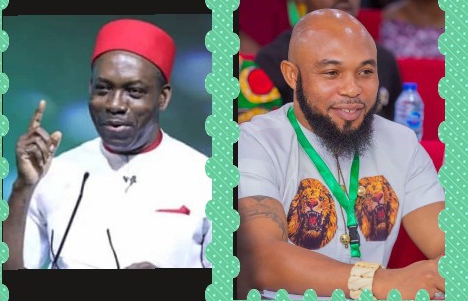 I wish to heartily congratulate the Governor-elect of Anambra state, Prof. Charles Chukwuma Soludo, on his outstanding victory in the just concluded Anambra gubernatorial election. It was an overwhelming victory that depicts the choice of Ndi Anambra.

Ndi Anambra have made their choice through the ballot boxes and the people’s mandate cannot be upturned or toiled with. Having won with great margin, in the 19 out of the 21 Local government areas in Anambra state, it is a glaring pointer that he is the choice of Ndi Anambra.

Prof., as I congratulate you, on behalf of Ndigbo Youth Parliament (NYP), I charge you to deploy all your world class experiences in making Anambra the economic hub of Nigeria. Anambra is blessed with several billionaires who have distinguished themselves in various enterprises. As the Governor-elect of Anmabra state with an intimidating curriculum vitae, the world is expecting so much from you, Prof. Charles Soludo, as soon as you take over as the substantive Governor of Anambra state. Yours should be a governance of galvanizing all the billionaires in Anambra, both those that voted for you and those that didn’t vote for you, so as to make Anambra state the Dubai and Japan of Africa. Anambra has what it takes to be the richest state in Nigeria, and Africa at large, if you magnetically draw all the Anambra billionaires together and give them complete sense of belonging in your government.

Prof., to whom much is given, much is expected. If you were able to excel as the CBN Governor, controlling the economy of the 36 states and FCT, then Anambra will be a walk-over for you as we expect you to give the state a world class facelift, economically and otherwise. You are equal to the task and we believe you will not fail the patriotic Ndi Anambra that dared all odds and came out to vote for you.

It is also imperative to note, which I assume you already have in your plans, that the Youth of Anambra must be carried along and given an unalloyed sense of belonging in your government. If you win the hearts of the Youth of Anambra, insecurity will dwindle and Anambra will thrive astronomically.

Once again, I congratulate you on your outstanding victory as I pray that the Almighty God who has called you to serve Ndi Anambra, at this critical point in the history, will give you the necessary grace and wisdom to better the lives of the people.

It is quite pertinent, at this point, that I give kudos to INEC for the introduction of BVAS machine which contributed immensely to the success of Anambra gubernatorial election. The BVAS machine has eradicated the trend of snatching of ballot boxes. There was no incidence of ballot box snatching in Anambra. I was on ground and monitored so many polling units in the just concluded election in Anambra; it was indeed free and fair.

I urge INEC to review some shortfalls witnessed during the election and update the BVAS machine for a better outing in the forthcoming general elections – 2023. There is need for a thorough schooling of all the INEC adhoc staff on how to operate the BVAS. While observing the election, I noticed that, in some places where the BVAS failed or delayed, it was either as a result of poor network or lack of proper technical-know-how on the part of the operators. The BVAS has an inbuilt network, if upgraded, but some adhoc staff were oblivious of this and it caused some delays.

In all, I laud INEC on the wonderful outing in Anambra state and for respecting the mandate of Ndi Anambra. This is a sign that Nigeria will be great again, soonest.

I thank all the good people of Anambra who dared all odds and ensured that the enemies of our land were put to shame by coming out to exercise their franchise in the just concluded gubernatorial election. You all, who came out to vote, are the heroes of our land. It was indeed a patriotic show of resilience. Peace and tranquility shall surely return to our beloved Igbo land.