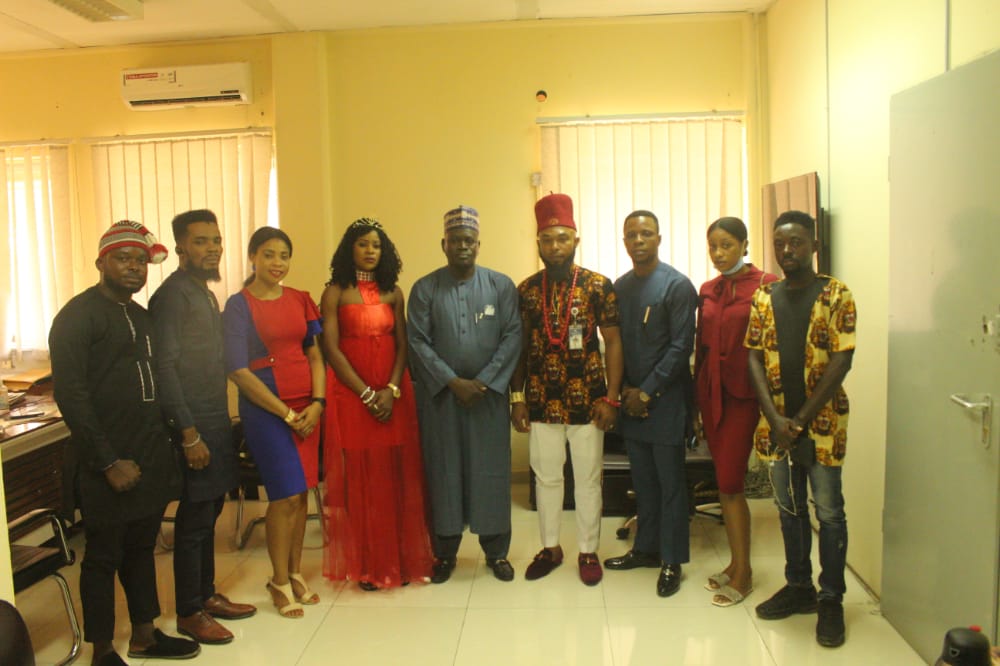 The leadership of Ndigbo Youth Parliament (NYP) led by the Speaker of the Parliament, Rt. Hon. Rikki Nwajiofor, paid a courtesy visit to the office of the Secretary to the Government of the Federation (SGF) on Tuesday.

The delegation of the Parliament was received by the Senior Special Assistant to President Buhari on Policy Development and Analysis, Hon. Ibrahim Hassan, on behalf of Boss Mustapha.

While addressing the SSA to the President on Policy Development and Analysis, Rt. Hon. Nwajiofor gave a brief background of the Parliament, which he said is pro-Nigeria and seeks to build bridges between the Youth of Igbo speaking states and the Youth of other ethnic nationalities in Nigeria for promotion of unity of the nation. The parliament, which is poised to project the interest of the Youth, is also on the mission of putting the politicians, from Igbo speaking states, on their toes to deliver the dividends of democracy to their electorates and constituencies.

Hon. Nwajiofor went ahead to state that the main cause of the rising agitation for secession in the South East, judging from the feedback the Parliament got from the security summit it organized in July and some townhall meetings held with the Youth at the grassroots, is lack of sense of belonging.

“The young people in the South East are propelled to agitate, sequel to the fact that they feel estranged in a country that they belong to. They feel they are not given sufficient sense of belonging to a country they hold so dear”.

He beckoned on the Federal government to initiate some empowerment programs, capacity building and trainings, specifically for the Youth of Igbo extraction. He equally requested that some scholarship schemes that are ongoing in the Northern Nigeria be extended to the Youth of Igbo speaking states. According to him,

“There is also the need for the office of SGF, Vice President and even the President of the federation to have intermittent roundtable discussions with the Youth leaders from Igbo speaking states. These, if properly done, will give Ndigbo Youth a sufficient sense of belonging and will exterminate the rising agitation for succession in the region. This will also eradicate the rising insecurity in the region, as a positively engaged mind has no room for the devil and his antics”.

Hon. Nwajiofor, speaking on the issue of IPOB, pleaded with the SGF to initiate a roundtable discussion with the sect, for a dialogue and possible solution.

“I wish to plead with the SGF to initiate a roundtable discussion and dialogue with the IPOB so as to find a lasting solution in the interest of the unity of this nation. There is nothing that negates the power of dialogue. A solution can be arrived at, when the disagreeing parties engage in dialogue, because in a dialogue grievances are laid bare by aggrieved parties and solutions are proffered. Not every problem is solved via forceful approach. Let the IPOB be invited on a roundtable discussion with the intention of granting them amnesty and proferring solutions to some of the causes of their agitation, which are not inimical to the unity of this great nation. A loving father brings an agitating child close for a proper reorientation and possible solution to the agitations.

“Ndigbo are generally known for peace, progress and unity. Thus, I believe that if a hand of dialogue is extended to IPOB sect, peace shall return to the region and Nigeria by extension.”

Hon. Nwajiofor also requested for the support of the SGF in the continued efforts of the Parliament to sensitize the Youth at the grassroots, on the need for a united and peaceful Nigeria.

In response to his speech, Hon. Ibrahim Hassan, SSA to the President on Policy Development and Analysis, lauded the Parliament for the wonderful efforts it is making in strengthening the unity of this nation and restoring peace in South East. He applauded the Parliament for the security summit it organized in July and urged the Speaker not to relent in his quest for a better Igbo speaking states and a better Nigeria.

Hon. Hassan who revealed his love for Ndi Igbo, told the story of his sojourn in the South East especially in Imo state where he is often welcomed and treated as one of their own. He went on to enumerate the various achievements of President Buhari’s government, especially in Igbo speaking states ranging from the 2nd Niger bridge down to the ongoing railways which will aid in transportation of containers imported by Igbo business moguls. He equally stated that Igbos will benefit more when the railway to Niger Republic and Cameroon borders will be completed, as they will be access for exportation by the Igbo merchants.

“There are loan facilities ongoing to help the business moguls who are mainly the Igbos. The persons at the helm of affairs in the disbursement of these loans are still from the Igbo speaking states, ranging from the CBN Governor to the CEOs of various banks.

“I am delighted with your efforts in sensitizing your people and striving to restore peace in South East. I will ensure that all the points and requests you made today are included in the official report that will be sent to Boss Mustapha, the SGF. All you said are quite practicable and I assure you that the SGF will surely look into them for immediate implementation, for the unity of our country and betterment of our teeming Youth.

“Once again, I welcome you to the office of the SGF and I appreciate your efforts. Thank you so much.”